From Pulitzer Prize winner Michael Hiltzik, the epic tale of the clash for supremacy between America’s railroad titans—an expansive, explosive battle that propelled America into the twentieth century.

In 1869, when the final spike was driven into the ties of the Transcontinental Railroad, few were prepared for its seismic aftershocks. Once a hodgepodge of short, squabbling lines, America’s railways soon boomed into a colossal industry helmed by a pageant of speculators, crooks, and visionaries. The vicious competition between empire builders such as Cornelius Vanderbilt, Jay Gould, J. P. Morgan, and E. H. Harriman sparked stock market frenzies, panics, and crashes; provoked strikes that upended the relationship between management and labor; transformed the nation’s geography; and culminated in a ferocious two-man battle that shook the nation’s financial markets to their foundations, producing dramatic, lasting changes in American business and government.

In this magisterial history, Michael Hiltzik brings to life these outsized figures and the era, industry, and nation that they defined. Spanning four decades and set against the gritty, glittering backdrop of the Gilded Age, Iron Empires reveals how the robber barons drove the country into the twentieth century — and almost sent it off the rails.

Read a chapter from “Iron Empires” 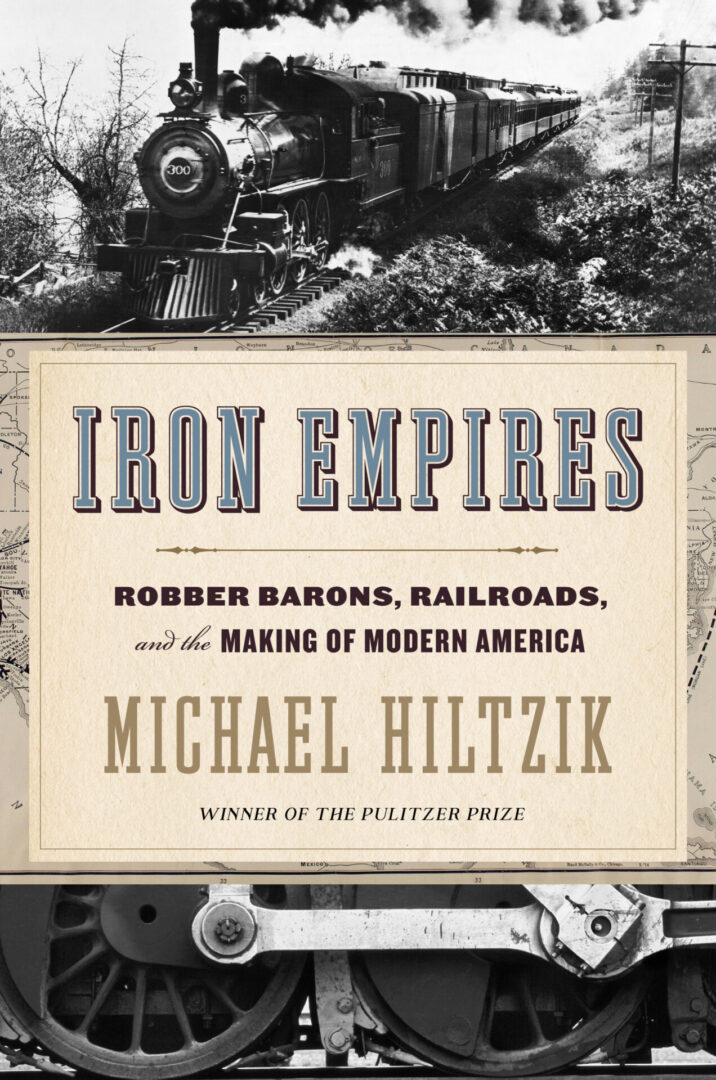 “Unbridled ambition, greed, corruption, ‘creative destruction,’ and a bit of conscience – Michael Hiltzik’s vivid account of the railroad barons in the Gilded Age shows us the workings of unbridled capitalism at its zenith (or nadir, as the case may be). The names Morgan, Harriman, Pullman, Hill, Villard, Rockefeller will forever be associated with creating America’s first great infrastructure and making America ‘modern.’”

Author of Ghosts of Gold Mountain: The Epic Story of the Chinese Who Built the Transcontinental Railroad

“This prodigiously researched book tells the fascinating stories of the railroad barons who did so much to build America, not only through their vision and genius, but also through their cunning and ruthlessness. Hiltzik’s brilliant narrative – of power and plutocrats – often bears uncanny parallels to what’s happening in America today.”

Author of Beaten Down, Worked Up: The Past, Present, and Future of American Labor

“Engrossing… [Hiltzik is] an able narrator, with an eye for telling detail.”

"An accomplished journalist with a knack for storytelling, Mr Hiltzik delves into dense financial details to present an engaging read about the beginnings of America Inc."

"Michael Hiltzik, an accomplished journalist and historian who won a Pulitzer Prize in 1999, brings us, in Iron Empires, the story of American railroads as a panoramic epic. Iron Empires is a grand story well told."

The Washington Independent Review of Books

“Hiltzik examines the rise and fall of the American railroad industry in this colorful, wide-ranging account…Hiltzik writes with verve, providing meaningful insights into the shocking inequalities of the Gilded Age. Business history buffs will be enthralled by this character-driven account.”

“A vigorously told history of the transcontinental railroad barons and the commercial and transportation empires they forged…Students of the Gilded Age and its unraveling will value this survey.”